Breakfast at the hotel is provided- it is in a small room with curtains drawn to the bright morning light and an 80’s music track for back ground music.  We meet there every morning not only for breakfast, but for our leader Sara to give us a run down of what will be happening that day.  While we are busy in our rooms looking at our Instagram feeds, checking Facebook and decompressing-Sara is in her room figuring out what our week will look like- chasing rumors of new squats (places where refugees have just set up camp-sometimes in the middle of the city, out in the open) who need support, which camps are open to aid groups and which camps have not already been visited by CTF.

To day we learned we would be visiting a camp about an hour away called Lavrio.  We had been asked to stop at the warehouse and pick up some aid that the camp directer had requested.  They had heard we were going to Lavrio the next day so when we were working yesterday they asked if we could stop by first.  Of course.

The van got loaded to the top!  Between our 2 huge bags of baby carriers and the aid we were literally stuffed.

It was a nice drive down mostly 2 story roads- the sun was shining, we would get glimpses of the sea at the beginning and end of our trip.  We arrived to what looked like an old school- “U” shaped with a courtyard in the middle.  This camp had was made up of all Kurds from Syria who had arrived in Greece about 2 months ago.  The different school rooms were each given to a family who in turn made them homey with beds along the walls, capet on the floor and curtains on the window-  a sense of pride was evident in the care taken to make this home.  We were asked repeatedly to sit down and have some food and/or tea. 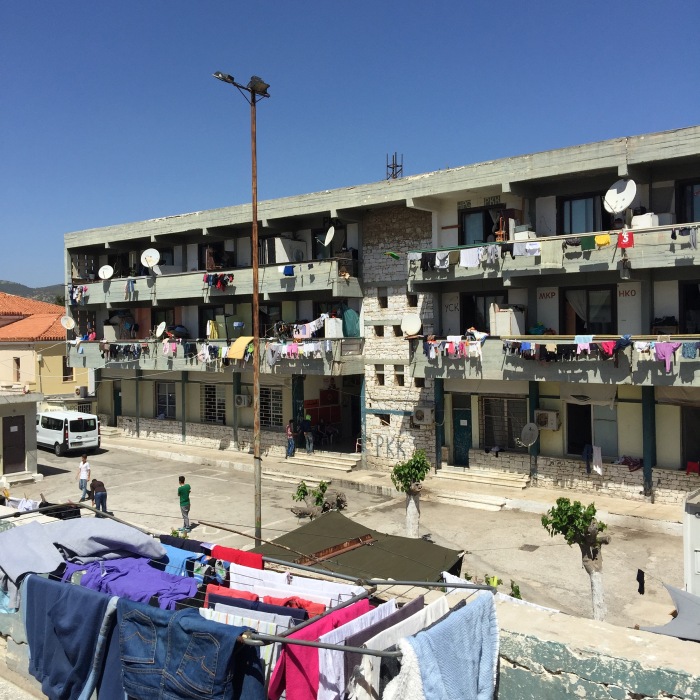 It is customary to take your shoes off before you step into a home- so the halls where a smattering of shoes, kicked off on the way inside.

We met with the director of the camp in a community room – we were offered tea, sugar was added.  My kind of people!  This woman here has 10 children and is in Greece with one of her 5 daughters and her grandchildren- one of which was a beautiful 15 year old-she walked with a limp and a cane, her lower leg was swollen to what looked like a very painful level.

We then split up between the 6 of us into 3 groups and went out to find babies-seriously, what is more exciting.  The older kids and a couple of the adults who could speak English came with us.  The first baby we fit was about 14 months old- she was so cute.  The hugest biggest blue eyes!  All smiles and coos-

Her mother while not able to tell us in English how happy she was,  her smile told us everything she could not.  We then went down the 3 floors of rooms and someone would go before us and call out to see if there were any babies in the rooms-if they were we their rooms we were invited inside or, out in the hallway fit the parent with the carrier.  Sometimes there were a couple of kids in which case we would fit both the mother AND the father.  Always such amazing smiles from both the kids and the parents. 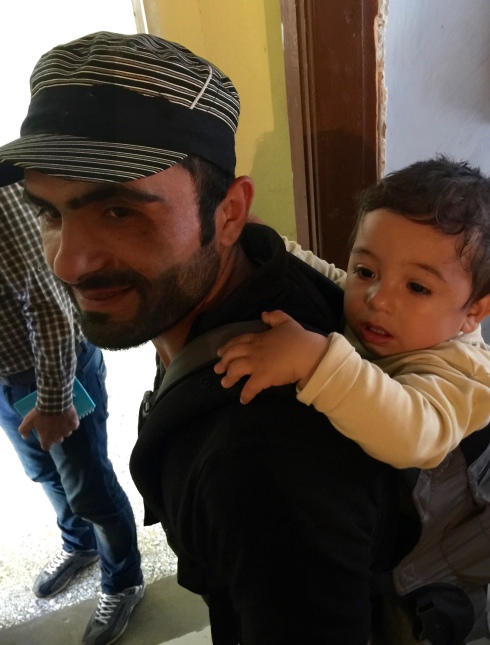 After a couple of hours we met in the courtyard- Sara had heard that in the building  next to this one was a building filled with families from Afghanistan.

So 3 of us went over there to fit carriers.  This population had only arrived within the month so were not as settled, but they obviously cooked with garlic because the whole building smelled amazing!!!    The different groups are separated in the camps – better for all involved.

The families were so warm, the fathers were always there also wanting to be fit with a carrier- in our last room, the mother had a small boy go and get a girl who turned out to be 18.  She wanted her to translate.  Apparently little aid had gotten to them, there were adults without shoes, or shoes with holes in them, not many clothes for the adults or the children.  The 18 year old translated a list – pants, shoes, sheets, socks, hair dye (the mothers request- even with a head scarf on, she wanted those roots covered) …… the warehouse is STUFFED with aid…..but no real way except volunteers packing, sorting then driving the aid to the different camps.  Insanely unjust- we promised to return in 5 days as the Kurd camp had also given us a list of things they needed.

We returned to the Kurd camp to find our other team mates playing with the kids- so fun to see the smiling happy faces- well there were a few tears but not many.

When we first arrived in the Kurd camp I noticed a boy about 10 holding his arm up- we were asked if we could transport him back to Athens to see a Dr with a X-ray machine to get it set.  Sara asked and permission was denied-the long arm of insurance reaches even to refugee camps in small town Greece.  I had a bandana on me and fixed him a very basic sling to at least keep the arm from moving- soon a car arrived to drive him into town.  The Red Cross had been called 2 times the previous day, no one came.

We were asked repeatedly if the boarder was open- one. big. huge. rumor mill.  These people are going to be in these camps/squats for a very long time.  The latest news from Levos-where the Pope visits today is that the newest route has the refugees landing in Itlay- Sicely about 2,000 a day.   Levis is the island in the south that was getting the vast majority of refugees until about a month ago when ships started intercepting the rafts in the ocean and returning people (illegally) back to Turkey.

We were running out of time as we had to meet back at the warehouse to reload the van for the camp we are visiting in the morning.  So we said our goodbyes- and headed back to Athens.  When we arrived at the warehouse all the items tomorrows camp had requested had been pulled so all we had to do was to load up the van once again.  Back to the hotel for about an hour then headed to a sea side restaurant for dinner- it was very good.  But mind bending to go from a camp with people who don’t have shoes to dinner on the sea.  Life does not make sense……

One thought on “Our first camps-Lavrio”