LONG day!  But good- first off CTF is the NGO we are working for and they are a really fabulous organization that has well over 100 volunteer employees around the world assisting not only in their mission but also teams that are on the ground.  There is a group called “well being” and yesterday morning they checked in and wanted to know how we all were doing- I though a picture speaks louder than words: 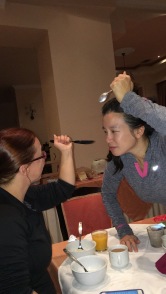 Actually the team has been so great- eager to help and learn, everyone is open and interested in learning all they can about what this word “refugee” means.  We map out our days the evening before and we realized the 4 camps we were scheduled to visit was just to much- factoring in getting lost (like EVERYDAY) and getting to a camp and basically not wanting to leave, we decided to just go to 2 camps.  GPS coordinates were provided which someone (jill) mistakenly took the wrong ones from a text message (jill) that may or may not have been (jill) the reason for a 3 hour “little detour” (as the incident shall be called hence forth).  We got on the road at 8am.  Weather was cloudy and misty/rainy.  Perfect for driving.

We had been told the camp was on the side of a lake- great, we soon approached a lake but we guided up a mountain AWAY from the lake by our Google map.  Now this is where you may be thinking “why don’t they turn around”, well in my experience the craziest location is often where the camps are located: in an industrial park reeking of natural gas, in a field tens of miles away from the nearest town…………the road climbed, then climbed ……..

By babbling brooks- from asphalt to a graded road, still we climbed.  Until we reached where the GPS told up to stop and when we did there clearly was not going

to be a camp.  Which we all were actually VERY thankful for- the thought of people on the top of this mountain being forgotten would have haunted all of us all winter.

The scenery was breathtaking, we passed a village literally carved into the mountain side.  We stopped to take pictures of the shrines that dot the country side and the beauty of the clouds below us.  Maybe not the drive we were expecting, but beautiful and memorable non the less.

We did eventually find the camp!  On the side of a lake as CTF staff had told up.  When you enter a camp I go and and greet the Greek military people, am usually ushered into the little office to give them our passports- calls are made, “no” is said many many times, still I sit, smiling, waiting.  Kind of like chess.  Finally our contact Sam drove up.  The team had been distracted by the 9 puppies playing by the entrance- we had bought dog treats a couple of days before since we were seeing so many dogs- some very skinny, non neutered and often in the most random places- in the middle of a highway, on the side of the road sleeping, in a store front…….

Sam was from Guernsey island (yes the very one from the book a few years back) he actually was there with his mother who has worked in aid work for many years most recently in Greece but also in Haiti.

What an amazing team- in less then a week the mom Sarah had taken over the distribution of aid- made a boutique (where people can come and pick out clothing), a food store, a sorting room and a holding room for donations.  Another example of ordinary people from around the globe doing extraordinary work with no pay, obnoxious hours, for sometimes months at a time and always with love and joy their work.  Truly amazing and inspiring.

The camp has been set up for families and unaccompanied minors.  There were over 500 people at the camp with 130 children under 5.  This was a “good” camp, no tents, in rooms with electricity……each family had a room usually with bunk beds for sleeping and mattresses on the ground for sitting.  While not ideal much better then the tent camps where mothers who once had state of the art ovens, stoves, televisions, dishwashers…..are now forced to live as if in Medieval times, cooking by fire, washing in tubs, fetching and heating water . The first mother we

visited had a 4 week old baby and was just recovering from a very painful tooth extraction- it had become infected soon after she gave birth-that baby was so cute!!!!

This mother had 2 other small children 3 and 1-1/2 and she was alone in Greece while her husband was in Germany.  Cannot imagine.

There was a young man (17) who came up to ask Sarah a question about getting some clothing – she shared with us that he had cut his wrists the day before and had been taken to the hospital. With barely any medical help for the refugees psychological help in non existent.  He had an unprepared cleft pallet which she said has been very hard for him as it is hard to understand his speaking.

That compiled with being alone in a foreign land at 17- seriously, wth!  Imagine how desperate you are as a mother to send your most likely 16 year old when he left, to a foreign land to make a new life because in Syria where he came from there is no hope.

But still on the side of lake (NOT the top of a mountain) mothers nurse babies, coo at them, older siblings love on the babies and crawl into the baby boxes for fun.  Still smiles and love in the most bleak of circumstances.

On the way back to Athens we stopped at the camp by the hot spring to drop off aid for babies we had collected on Monday in Athens and to deliver the soccer balls and volleyballs that had been requested.  It was a quick st0p and we soon were back in Athens for our last 4 nights.

One thought on “Lost on a mountain top.”