Full day!!!  We stayed in a great hotel in Athens, it kind of recharged our batteries!  We were up and out the door early we had a full schedule so needed to get started early.

We headed to the big warehouse on the former Olympic site- Ellininko.   We were going to put our baby baskets there for Team Athens member Rita to pick up later in the week. There were 2 in our group that saw the warehouse for their first time.  It really is breathtaking how much aid there is in this space.  Unfortunately the same issues that have always plagued distribution remains- not enough of the items really needed, no means to deliver to the camps (aside from camps sending little cars out to collect items) and tons, literally tons of undeliverable aid.  The latest was someone sent a child size bee keepers outfit.  Really…………..

Our 1st stop is a fantastic project Amanda and I had visited in January.  The HOMProject works with unaccompanied minors and pregnant and young mothers.  In January they had 1 house open and today 5!  Unbelievable to be working that fast in Athens.  They were in need of some food so between getting some at the warehouse and the grocery store they were good to go for at least a week!

teenage mothers.  Sexual assault and exploitation is a reality for many in the camps.  Both girls and boys.  The house we toured in Jan housing boys has been refitted to receive the young mothers- cribs, playpens and high chairs dot the family like home.  There will be 16 children in the home with 12 supporting staff members.  This group is making a real difference in these kid’s lives.  The work is very difficult and wrought with many back steps, but in 5 short months they have seen the changes in the kids that have been with them for the last 5 months.  A beam of light.

At the warehouse we had also loaded up with items for the camp we’d visited yesterday- they actually had requested items that they were supposed to have picked up by Easter.  4 pallets of shoes and clothes.  We were able to take a pallet and a half of goods and 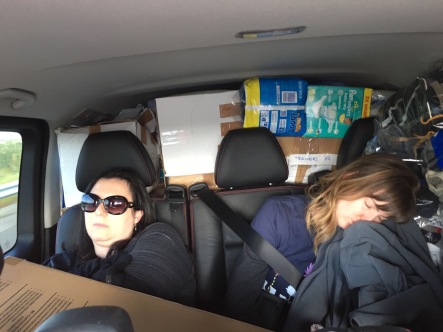 squish them into the van.   The girls had to drive the 2 hours with boxes on their laps, well, sit and sleep.

yesterday.  The kids were excited to receive pictures of themselves.

We could not spend much extra time at the camp as we still had a 4 hour drive ahead of us.  These days get so long!  Every night we have dinner starting at 11:00pm- 11:30pm.

We remind ourselves we are here to work- the drive North was beautiful.  Watching the sun set over the sea is never tiring.

Dinner was at a Russian restaurant a 10 min walk from the hotel.

We were tired but still managed to talk about the day, the highs, the lows and to laugh.