Edin and Anita are college friends who started Refugee Foundations we saved them their usual hour long walk to the camp this morning and on the way we stopped at a small veggie market and Amanda bought some fruit and veggies for the English lesson she’d written.

When we arrived on camp there were about a dozen kids already lined up at the door, noses 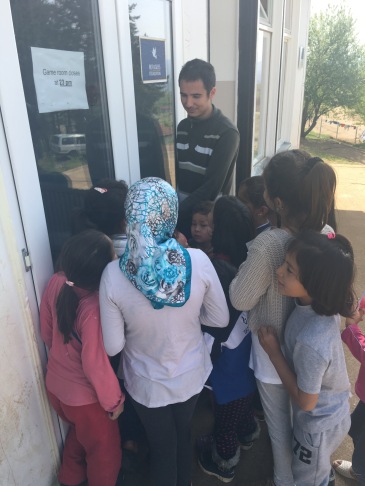 pressed against the glass.  Each clamoring to be the 1st one into the classroom.  Rhythm is so important for children, especially when your life is as topsy turvey as these kid’s is.

They all know the schedule:

The new little kids table was packed with younger siblings playing with the big Lego’s we’d bought earlier in the week.  The English class was very quiet and orderly- the only noise was from the littles at their table.  Every child has a notebook that they would dutifully write the new word into from the

white board, some would also write it in Farsi to remember.  We would call on each of them to say the word and go around to each table to help with pronunciation.

5 days a week, always the same.  Although Anita and Edin have only been working at this camp for a month the kid’s English is quite good.

The break for sports took place up a hill on an old busted up asphalt field.  There were 2 small soccer goals and a broken basketball hoop.  Everyone started out by stretching then a soccer game began and the littler kids practiced their basketball skills weaving in and out and around water bottles that had been filled with sand.  The day was beautiful, the sky blue and the clouds fluffy. 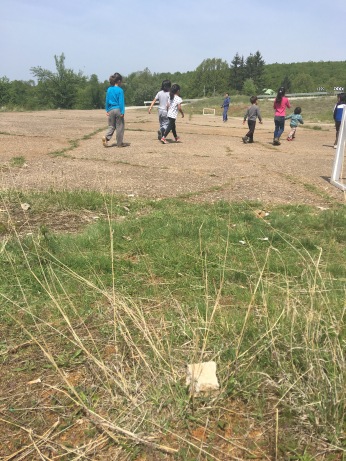 Amanda and I were able to talk to the camp Commander, he is very supportive of Anita and Edins work.  We asked if there was anything for the camp he needed and he said flea and tick medicine for the dogs- done!  There are about a half dozen adult dogs and about a dozen puppies roaming the camp.  He also gave permission for Carry the Future to ship baby beds and swag directly to the camp.  He also is in control of 3 other camps around here and he said we could ship to them too!  BINGO!!!  Home run!

Unlike Greece where most everyone of the camps has a warehouse on site, or near that supports the residents with basics.  In Serbia there are no warehouses and NGO’s are not (usually) able to give anything out.  This will be the 2nd time that CTF has been authorized to provide necessities to new mothers and babies in Serbia (CTF has also provided baby carriers).

After lunch the adult classes begin.  First is English I, conversational English, Serbian 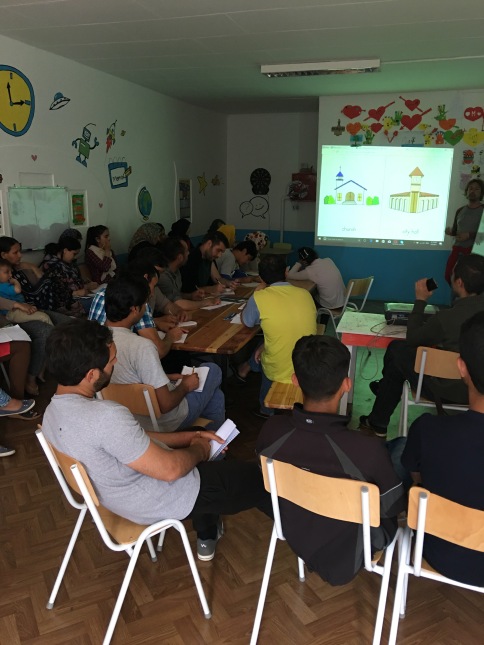 then German.  There were almost 30 people in each of the English classes.  While it was not spoken, the classes segregated- men on one side, women on the other.  This camp has people from Afghanistan, Iran and Syria.  At times these populations would not get along but here they are each others villagers.  They help and support each other while learning new languages.  They laugh at, hold and kiss each others babies.  Each one of these people have horrific stories.  Yet they move forward- slowly.

While the adults had classes Anita set up the big Lego’s for the small kids to play with.  About a dozen kids came and went over the 2 hours we sat there.  A mother with a very small 18 month old,

wearily sat down next to me.  We watched her daughter move from one thing to another, grabbing blocks out of hands, so busy!

We are not allowed to publish the faces of the residents of this camp.  You can get the idea- there is a girl who is 11 but looks more like 7 or 8 very much small for her age.  Her English is quite good and she is the 1st one to raise her hand to answer our questions during English class and is the 1st one to pass a just finished picture to us.  Her hair has fallen out in clumps, there are big bald patches.  She is treated the same among her peers.  In another camp there is a similar girl, but she is mostly all bald- from malnutrition i’ve been told.  I asked Edin about this girl- big words like hospital, leukemia and chemotherapy was his answer.  My heart is heavy for this child’s mother who heard that awful word “cancer”.  This mother has no control over her environment, in this camp here are 6-8 people per room-sometimes families are combined.  She does not know where her child receives (or doesn’t receive) treatment, she must be driven to the hospital and clinic as it is to far to walk.  Even doing the most basic motherly instinct- feeding her child, is out of her control.  3 times a day food is delivered to camp- not her choice.  Thankfully everyone says the food is good.  But still.

It is so beautiful around the camp- it sits up a mountain on a long winding road.  It is an

hours walk to town and the city bus comes once a week.

This work is hard emotionally which drags me down physically.  Yet I see the light in peoples eyes when they see us coming to visit.  We are a reminder to them that the world has not forgotten them.  And the only way we can be here is all the support we get from our family and friends back home.  Our villagers supporting those of us here working but also our children at home- it eases our minds so that we can focus on what is in front of us.  To let the unseen be seen, to listen to their stories.  To just be with them sitting watching a toddler dart around like a cricket.