Lavrio is a picturesque town about an hour outside of Athens, sailboats and yachts line the seaside along with cafes touting fresh fish, Greek salads and crepes.  It is also the home to 3 refugee camps.  I’ve visited Lavrio on all of my previous trips-

Last night we’d gotten the diaper list from a woman who helps the least supported of the camps.  The camp is surrounded by what once was a garbage pile.  24 -ISO boxes housing 82 people.  Each box holds a family if big enough- or 2 families if the families are small enough.  Two rooms about 10’X12′ divided by a bathroom makes an ISO box home.

Three weeks ago the garbage dump started on fire- or was started, who knows, but it burned.  For days.  The powers that be have fenced the parameter of the camp, bulldozed what was left of the garbage pile and what remains is home to these people.

Marie and her Mom met us as we drove up to the compound- the ISO boxes make a rectangle around an open space.  The Red Cross who manages this camp will not let the volunteers add another permeant structure in the middle of the boxes- a big UNHCR tent would be the perfect solution but this request will take months to move up the food chain of bureaucracy.  One of the containers is used as a meeting space and 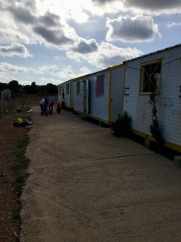 the small bedroom as storage.  We’d been told the number of diapers that were needed- but we also wanted to get a feeling for the needs of the camp so that future CTF teams could budget accordingly.  This was my 3rd time to the camp and each time we were

invited by the leader of the camp to go into the office space, sit, fruit would be brought and we would be asked if we wanted tea or coffee.  If yes to coffee- “sweet” or “no sweet”.

Amanda and I had visited this isolated camp before and recognized some of the faces.  The children STILL are not going to school.  In the past year the EU and Greek governments have been moving refugees for the most part to Athens and Thessaloniki where each person is given a flat to live in and given about $90 USD per month to live on: cloths, food,school supplies, toiletries……..but for many this is a huge improvement from what they have fled.

Nine of this camps residents were without financial support so the rest of the camp helps those families.  When asked what their most pressing needs are the response was “dish washing detergent”.  Ok, we thought- “what are you using now to wash your dishes?”.  “Shampoo”.  We knew that the main warehouse in Athens had done a distribution of winter clothing and shoes 2 weeks ago.

We pressed for more items- “do you need soap to wash your clothes?”.  “No, we have that”.  “Tea?”, “yes, we do not have much tea”…..and so it went on.  While we were offered as guests a plate over flowing with fruit the camp leaders were reluctant to ask for anything.  We know from past experience if they need tea they also need sugar, and if there is no tea there most likely is no protein.

We unloaded the car of the diapers and wipes we’d picked up on our way down to Lavrio.  We told them that we would be back.

We’d loaded the car up in Athens but we now returned to the Jumbo which was next to the new grocery store to purchase the items needed and then some.  It is like a

snow ball effect- no dish soap, most likely no sponges.  If no sponges, then no wash rags.  If no wash rags no scrubbier, pads for the girls, cookies for the kids………on and on.  We filled 2 Jumbo carts with items that we would want in our own kitchen.  Just the basics- 24 of everything.  Imagine this video with the most obnoxious background music on noise level 7 and that my friends is a snap shot of each and every shopping trip we make to Jumbo.  Some times 2 times a day- our heads spin with colors and ear worms.

Next we went to the grocery store to grab food……..tea, sugar,biscuits, cheese, eggs………soon our car was filled again.  We drove to the camp- about a dozen people 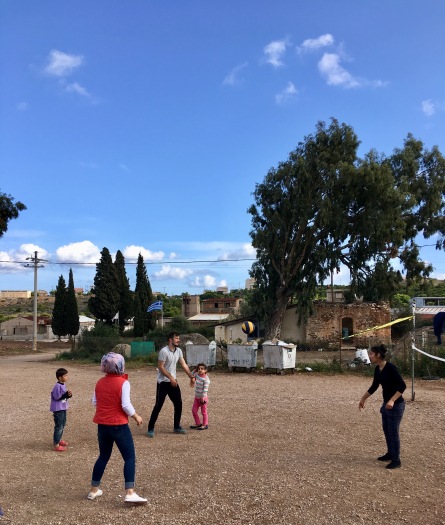 were playing volleyball- a beautiful night, the sky a shocking blue with big white fluffy clouds meandering across the horizon.  There were laughs and cheers as the young men and women played- younger children darted between the players in what appeared to be a very serious game.

Smiles on everyones faces-just people making a new life for themselves – mostly forgotten by the outside world but making a home and community in their new normal.  Their new lives.

refugees who take the “death boats” from the Turkish coast 4 miles away.  Susannah is running the Athens Marathon tomorrow so we met up for an early dinner.  Of course we chatted for 3 hours, lots of laughs and reminiscing about the trips we’d made for CTF and our families that we leave behind to do this work.   After dinner we walked a bit thru the crowed streets of Central Athens.  Once again our intention of getting to bed before 1:00am will not happen.

Tomorrow Jen and Amanda leave for home- they had been in Serbia and Northern Greece until their return to Athens last night.  Today was day 9 of their trip- the tail end. Long days, hard work.  Physically and emotionally but each of us would not trade this for anything.  Sleep……we all can sleep on the flights home.