You know you are near a refugee camp when the road goes from 1-1/2 lanes wide, to basically a goat path.  Vial is no different.  Located up on a hill in the middle of the island Chios is Vial Camp.  Originally built as a prison for 800 people, it now houses over 3,000 refugees that arrive in dinghies, ransoms paid to leave Turkey to smugglers in hopes of a better life.

Vial is one of 5 islands that the dinghies (or “death boats” as the refugees often refer to them as) arrive on from Turkey.  Mostly Syrians but also people fleeing war and unimaginable oppression from the Middle East but also from as far away as Africa.    On Vial there are a handful of NGO’s that support the residents of the camp that is run by the Greek Police.  This week we will mostly be working at The Iris Center which supports mother, fathers and children with clothing, showers, baby necessities and toiletries.  But most importantly, a respite from the horrors of living in a camp. 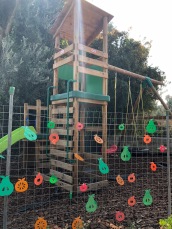 The closest mini-market is a 20 minute walk away, as is the Iris Center.  Located next to farm is a warehouse space that has a children’s play yard, 4 showers, a “store” (a place in the center where people can “shop” for clothing every month, much more dignified then being handed a bag of clothing) and a place to escape the daily horrors of living in a camp.

Two times a week volunteers from the Iris Center go to the gates of the camp and register the newly arrived and after that the residents can sign up to come to the Center 5 days a week in either an AM or PM time slot.  Each time slot approximately 30 women, children and husbands will come to the Center.  In the camp there are 20 showers, 20 bathrooms and water 1 hour a day.

The first group of people to arrive were 5 or 6 families, each was checked in- given a number as each family gets their own time to shop and take showers.  The rest of the families are able to sit inside, the children can play within eye site at 2 different play yards and often tea/chai or coffee will be offered as the weary moms and dads sit for just a minute or two. 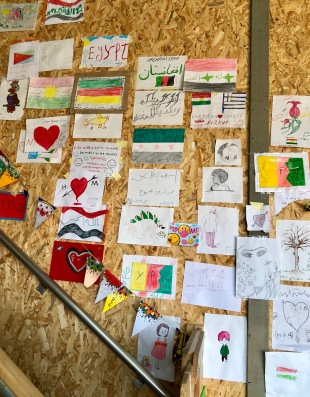 People are at this camp living in metal boxes called “ISO boxes”, sleeping in tents or hard sleeping (on the ground without any shelter) for up to 2+ years.  Food is provided by the police but is often rancid.  With winter approaching the volunteers have had the winter clothing out for weeks now.  Each winter people freeze to death in these island camps.  It is a race against time.

The Centers volunteers were a mini United Nations:  Singapore, Norway, Switzerland, US and Canada.  The Center uses volunteer translators from the camp – a huge help with communication but also equally important giving the translators purpose.

The highlight was a 22 day old baby that came in the its parents.  A first baby for the couple from Afghanistan and a girl.  Mom had the tired look of not enough sleep but such a sweet smile and love for this tiny baby whose name means “interlocking hearts”.   The parents were so proud and we all took turns holding and cooing over the baby.   Sara fit the the Mom with a baby carrier – a donation we’d brought with us from the US.

Like magic, the baby had even the toddlers attention. Dad had studied English at university in Afghanistan for 2 years, his English was excellent.  His wife also spoke English.  There was talk of imprisonments and sea crossings, hopes of a job in Athens and a dream of settling in Canada.