A full day!!! The company that CTF contracts with dropped off our van in the morning-there were a few little hiccups as as we needed some additional paperwork and snow chains. Am ever so thankful for the Canadian riding shot gun this trip she is more than used to winter driving!!!

We made it over to the main warehouse in Athens not to much after it had opened. Literally not much has changed- just more stuff. The CTF baby carriers and baby boxes were in a smaller room and we set to work separating out carriers for infants and toddlers. As all of these carriers were donated we would get glimpses of the beautiful notes and beams of love people would attach to their carriers. 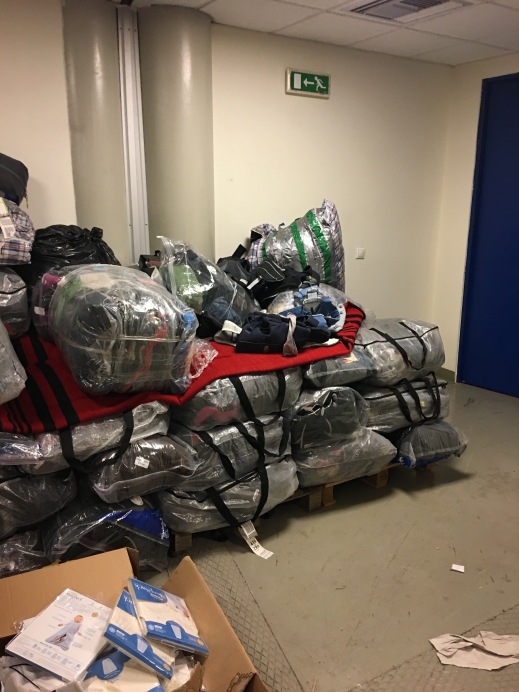 close to their mothers and fathers. So beautiful.

We were running out of toddler carriers when I texted CTF staff that we were not finding as many toddler carriers as we needed. We were looking for 100 infant carriers and 400 toddler carriers. Laura told me that over at the Salvation Army warehouse Ergo had donated 600 carriers! Boom baby. We spent a bit of time organizing the baby carriers and loaded our bags of carriers in the back of the van and filled the 2nd seat with baby boxes.

Even having been to the Salvation Army like EIGHT times- I can never find that dang thing! We finally did- and it was already 3:00 which means it could be closed. We rang the bell, called the number on the door, finally a volunteer came outside to throw some garbage away and we were able to go upstairs and see our pallets of carriers.

This is a multi story warehouse- our 5 pallets were way upstairs. It was good to see that 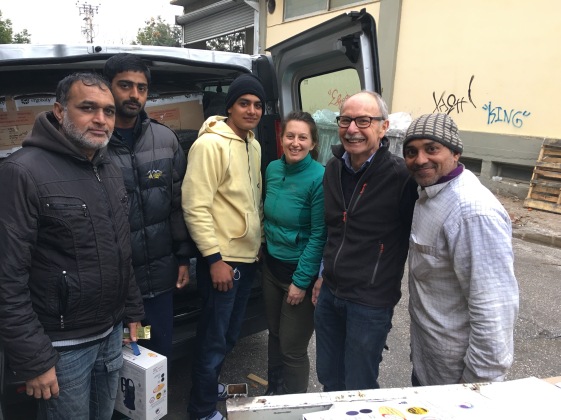 they had about 12 volunteers shifting and organizing. But after being in the warehouse in France- it will be hard to see another warehouse so well organized. One of the men brought our pallet down to the street level where Amanda and we started opening the big boxes that held 10 Ergo’s each, taking out the literature then repackaging them in the boxes (this is all needed so that the items can get thru to Serbia). We had a nice little assembly line going- about 45 min into the job 2 recyclers came by and mimed “can we have your boxes”.

Jackpot! Soon they were helping us open the boxes- they would then take the cardboard and put it in their cart where it would go to be sold. Both men were from Pakistan- most likely refugees themselves. Soon one of the men’s nephew came up with a friend and they started helping. All along a retire from the Netherlands who was here working at the Salvation Army for 3 months was helping us too- he was in Greece to with the mission to get the warehouse organized. A true global enterprise. Of course at 4 the boss wanted to shut us down, but with some sad faces and then big smiles- he let us continue our work until we finished- he even brought us down another pallet of carriers.

The van is now LOADED! We said goodbye and headed to the north. Almost immediately from leaving Athens we were in thick fog- there was snow on the ground that only got

thicker. About an hour outside Athens we could see tons of semi-trucks at stops and toll booths. We learned later that because they did not have snow chains they could not go further. The highways in Greece are beautiful – from Athens to the way North it is about a 5 hour drive and there are 10 tolls total.

About 8pm we decided to find a town to sleep in- we were tired. We ended up in Lamia. TripAdvisor only had 4 hotels listed- so we headed off the highway towards the town. It was about 4 miles from the highway and the closer we got to the town the more snow there was on the ground! It was crazy! Tons of snow. We got checked into our hotel and walked about 3 blocks to the city center where we found a restaurant owned by a young man that had only been open 15 days- we got something like 7 dishes total- all amazing

We will slowly make our way to to Serbia- but tomorrow we will drop the baby boxes at a camp about 4 hours north of us.