This cold spell is not normal for Greece- to see snow in the cities and on beaches is not the norm.  Amanda and I cannot help but think of the refugees in tents or in unheated buildings.  We worked in the main warehouse in Athens yesterday and it is crazy how cold it was in that concrete building but outside a good 20 degrees warmer!   It seems that we are trading off with rooms with no heat- my turn was last night.  You start thinking as you

lay there “surely the heat will kick in soon”, then you might get up and look for an extra blanket in the cupboard, then dig around in your roller bag for the long underwear…….it made for a long night but did eventually get some sleep with like 10 layers on!

We had breakfast in the hotel- usually and egg, some Greek yogurt with honey, a piece of fruit.  Very simple.  We were anxious to get on the road- we arrived in the dark and were surprised to see in the morning light we were circled with snow drenched mountains.  The sky was a crisp blue- so lovely.

It was about a 4 hour drive to the camp we were bring baby boxes to- the roads were great. Even with a slight fuel issue………our car takes natural gas AND fuel.   This camp is located up a hill on the side of the a lake about 2 miles from the closest city.   Today marked the 99th day that Bridge 2 has been in

this camp working.  Our team 19 was at the camp on day 19 and we were impressed with what they had done in that short of time, and now WOW!!!  Bridge 2 is run by a mother and son from Guernsey Island- Mary had left to go back home only this morning but Sam was there to greet us.  We dropped off our baby boxes in their amazingly organized warehouse and then got a tour.  The camp has 255 residents with 75 under the age of 6-all of these people live in 67 rooms spread out in 4 buildings of an old army camp.

They have done so much!  Last we were here in Oct there was a store “boutique” where residents can “shop” 2x a month, a shop to pick out food 1-2 X a week.  Bridge 2 buys all of

the food with donations and the clothing and shoes comes from a warehouse up near here called Help Refugees- the same group we worked with in France last week.  This is the warehouse that housed our baby boxes for distribution in the North.  As organized as the one in France.

Since I was here last they have added: a women’s salon, a men’s barber/mens area and a 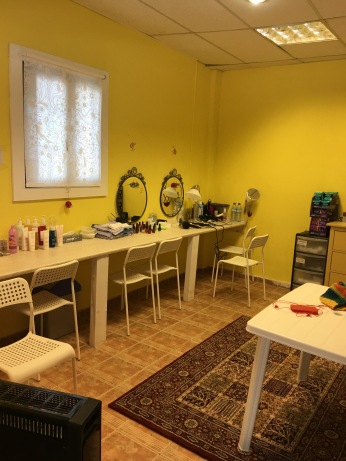 shoe shop.  Mind you, no money is exchanged the residents are able to use facilities and get the food and clothing for free.  Not everyday- many volunteers are needed for distribution so that happens for clothing 1-2 times a month and for food every week.

As lovely as the spaces are and how lucky the residents are to NOT be in a tent, this is not home.  Each family lives in a room, everyone…….1 room.  Food is prepared in this room, you sleep and pass the day here.  They are not allowed to work (except in circumstances like below) their future hinges on the day they go to an interview where they will list in order of preference 8 countries they would like to resettle in.   But nothing is guaranteed – some EU countries resettle within a week of an interview for someone who has a skill that they are looking for.  Others may wait months- we are fast approaching a year since the borders closed- still people wait or try and sneak across borders to reach waiting family or just trying once again for a better life.  This Greek life is like a life on hold……with no end in site.  I’ve said this before, and the statistic is staggering but the average stay in a camp is 18 years.  Imagine.  One room, no hope……

The children are being bused to Greek schools and there are schools in the camp for additional learning.  The government has hired the residents that are teachers to teach.  If so motivated a child could attend 7 hours of school a day counting the Greek school and the camp school.

We met 2 women volunteers from Sweden- they had both been here for 2 weeks.  They looked to be a bit older than me- we went to their farewell dinner this evening with them Sam and a newly arrived Spanish volunteer.  Half of us were over 50 – for 2 of them this was their 1st time volunteering.  Just like so many before them, they were already thinking how to carve out the time away from their busy lives to head to Greece to help.