The 2 Swedish volunteers we met yesterday at the camp told us about the hotel they were staying at in the old Jewish Quarter of town.  Last night we followed them up and down narrow 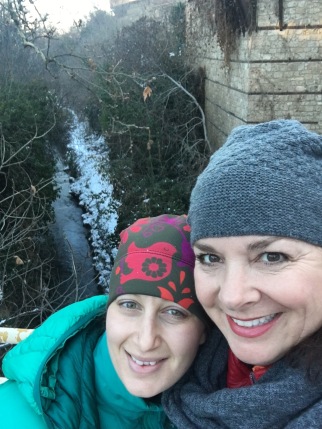 lanes, parked on the side of a rushing creek and had to walk the last bit of the way.  We can imagine how beautiful it would be here in the summer.

We both slept so well with both of us having heat in our rooms!  What a difference.  It is a short 15 drive to the camp.  Sam had told us that a group of Americans (5 in total) would be working at the camp for the next week.  We walked into their intro meeting just as Sam was finishing up.  Turns out they are from a church in Texas – this group was all in their 50 & 60’s, they had done this type of work before and set to work organizing the shoe room.

When I write this it does seem crazy that someone would travel to the other side of the world to sort shoes.  But it really isn’t just sorting shoes, it is seeing with your own eyes what is happening- these stories we hear and the images burned into our brains are the fuel to keep this tragedy alive so people will not forget. To go forth and share what we have seen and heard once home. It is also the “thank you”s we hear from the refugees themselves- it gives them hope that in a small town in northern Greece, in an old Army camp that people see them. Really see them for who they are…….our brothers and sisters. That they have not been forgotten during this very dark time in their lives

Amanada and I set to work organizing the clothing storage areas.  These are 2 rooms.  One is mostly organized with fantastic Ikea bins a group came and did for the camp-each bin contains an age group and type of clothing…….think……baby 0-2 months boys sleepers, M-mens long sleeve shirt.  Now think of all the bins you would need and basically they are all here in this room.  The next room is, well a mess!  Unsorted clothing, out of season clothing.  In the summer the heat will be blazing in this part of Greece.  Amanda and I went from room to room organizing.  At one point there was a knock at the door and a

mother with a month old baby, 2 girls (2 and 4) and her husband wanted a coat for the girls.  Distribution happens every other week, the residents come in one family at a time to pick out clothing.  For some reason these 2 little girls had Spring thin coats on in the freezing cold.  I called to Amanda and we went to work trying to find them coats- it was unbelievable hard!  Either the bin for the “Girl-Winter Coat age 2” was empty or none of the coats were warm enough.  We really shouldn’t even have been doing the distribution but-how do you say no to two freezing kids?  We finally found a couple coats that worked-they were ever so grateful and with smiles and waves they walked back to their room.  The girls in warm coats.

Sam had told us last night that a baby had been born 4 days earlier- he said we would be able to deliver a baby bed to her and to pick out some baby clothes.  Fun fun!  We went to town adding to the CTF baby box- onesies, pjs, blankets, outfits and the cutest

little sleep sacks!   Sam was busy until about 2 when he walked with us to the new babies room.  This was the 4th baby for this family- they had 3 girls (6,4,2) and now a boy!

Their room was maybe 14’X14′.  There was a set of bunkbeds and a single bed.  For all 6 of them.  Imagine living in a room this size.  As is the case in most camps, there is a blanket screen in front of the door, in front of the door is where you leave your shoes and on the floor of the room are blankets.  The new mom looked tired, but very happy.  We were asked if we wanted tea, and the tea kettle was plugged into their one outlet and soon we were drinking very sweet HOT tea.  The baby could not have weighed 6lbs.  So small, he slept the whole time.

Almost every refugee mom is given a c-section in Greece- we could see mom wince everytime she moved.  We asked if she was breast feeding and she said yes- always good to hear.  There was not a translator in the room but the dad said something about the middle of the night.  Sam told us that the camp turns the heat off to the buildings at 1am to save money on fuel.  The dad was worried about the new baby getting cold.  The lows hover at or below freezing.  Amanda and I asked if they could have a heater?  He said “yes”, electric would be best.  So we added to our shopping list for the night 1-space heater.  We also were going to get mom some diapers and pads.

The 2 year old sat next to me holding her new brother, playing with some little plastic shapes.  No play room, no bins of toys.  10 little plastic pieces- she would stack and unstack them.  Not yet aware that she is a child without a home or a country.