While there is no such thing as a “typical” day, today was about right for what happens on the ground on a CTF trip.  I found a feature in “Notes” that lets me put a check mark in

the bubble once a task is completed.  I’m sure this has been around for ages, but I just found it. I LOVE lists- and this one I can have on me ALL of the time.

Everything on this list took me all day- like 13 hours.  The list is not that long- but sometimes you get side tracked, for instance when I went to meet Kerrie at Hope Cafe at noon, they were swamped with people (today they fed 175 people a free hot nutritious meal- a new record for them) so I asked where they needed help.  “Upstairs in the Free Store”. So up the stairs I went- a volunteer from the UK was helping people pick out items.  The refugees would be asigned a number and would one family at a time climb the winding flight of stairs to pick out cloths.  At the beginning of this crisis people were just handed bags of clothing:  boy/0-3 month, girl/8 years old, Mens/medium……….no dignity.  Most NGO’s have gone to “shop”

style distribution where people can pick from items on display- the aid has already been sorted, Public service announcement:  “NEVER donate your underwear, that dirty old t-shirt you use for painting, that pair of flip flops your kid wore all summer….basically if you wouldn’t wear it, don’t send it“. Period.

On the right is an example of fantastic donated clean ready to put out items:  clearly labeled:  boy/0-3 m.  So simple and so lovely.  I stayed up and helped families with clothes and in-between put new aid on the shelves.

The list had me driving all over Athens- drove past the stadium where all the marathoners came into on Sunday!  Also saw one of the guards with the funny shoes and 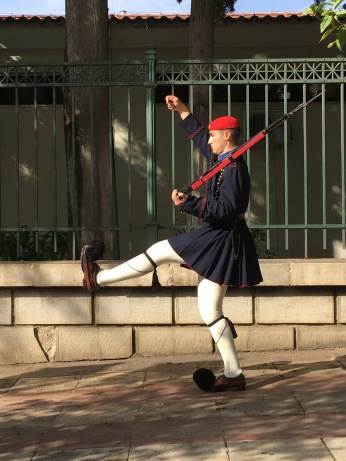 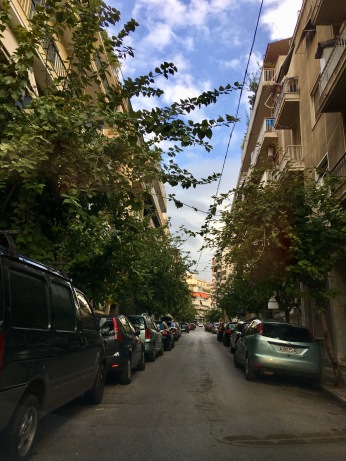 There are 2 types of streets wide tree lined avenues and narrow roads alternate one ways.  Now on the wide avenues this picture while looking relaxing is not a true representation of how it usually is.  Which is there are 4 more lanes of traffic, there are no street lines (wore off) and motorcycles are zooming between cars ALL.THE.TIME.  Kind of like in LA except not only on the 405.

Amurtel (the midwife/pre-post moms) has a room for the kids to play in- well, except

there were no toys so made a trip to Ikea to get some toys for the room.  Took a picture, Ikea in Greece is EXACTLY like Ikea in Arizona.  Tons of people, not enough cashiers and everything is in Greek.

It was in a super big mall and I was able to hit a Jumbo on the same trip- except the Jumbo was super urban, they didn’t have the big carts so it was not very fun fitting 20 packages of size “3” diapers in the little pull behind bins they had.  But made it work and one of the cashiers helped me drag my bags back to my car parallel parked on the street.  Which one must do many times a day in Greece.

Kerry at Hope Cafe sits on a group of about 30 NGO’s based in Athens that meet monthly. She also happens to be on the “Winterization” committee and invited me to the meeting tonight.  Winter is coming- so this group has reached out to the greater group and have

created a spread sheet where everyone can add what winter aid they have:  blankets, sleeping bags, winter clothing and of this aid which can they pass onto other NGO’s in need.  Like most committee work, it is tedious but once the document is complete lives will be saved- there are many refugees sleeping hard (outside without shelter) and sometimes even if they are in an apartment there is no heat.

A very full day- lunch was a granola bar driving from Ikea to Jumbo.  Team 35 made it to Lesvos this morning.  Their photos are amazing- those ferries are unbelievable!  So huge.

Tomorrow is my last day here- the time has gone so fast!  Well, it always does but when i’m here it seems to go even faster!  Rob sends me an update that I wake up to every morning.  He usually has a couple photos of the dogs for me- he knows me so well!  Zachary who fell off a cliff 5 weeks ago (he broke 2 ribs and both his feet) sent me a video ON A CLIFF looking over a beautiful valley.  OMG that kid!  In the video he’s all like “Hun, look at this beautiful hidden valley” as the camera sweeps past very high mountains and a very deep valley.