The morning broke with cloudy sky heavy with rain and a forecast that said “90% chance of rain”.  Not the best forecast when we were going to do toiletry distribution!  We communicate with CTF and their partners mostly on Whats App and Messenger.  All day long the phone dings with notifications of updates.  Plans change the day of a task, as well as we are constantly looking ahead in the week to keep things moving smoothly.

Today at breakfast we got notice from Iris House that a 40′ container of goods sent from Norway 15 months ago, tied up in transit had miraculously appeared at the container area and needed to be unloaded before we sorted and loaded our cars for the toiletry distribution.

We arrived at the container area fully expecting to unload the truck in the pouring rain. 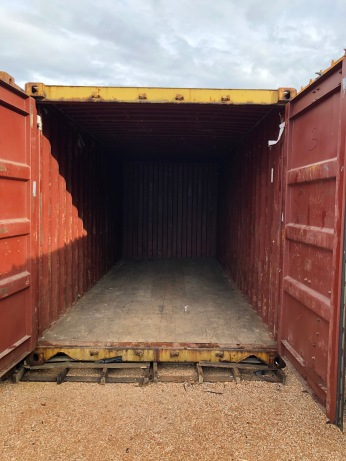 No rain.  And there were about 30 volunteers from many of the other NGO’s on the island and all of their interpreters and volunteers.  The interpreters live at Vial camp or in Chios- boredom is stifling.  Unloading a truck of aid gives them purpose, people worked with smiles.  Happy to be helping.

Interpreters sprang into action and climbed up into the truck and started unwrapping the pallets of goods and we began the process of putting the already sorted boxes of aid into an empty container.  I was put in charge of organizing  and with tape marked where all the aid was to go- “men”, “women”, “children”, “hats, mittens, scarves”.

It was if a “start” button was pushed.  Soon lines were formed and the unloading began. 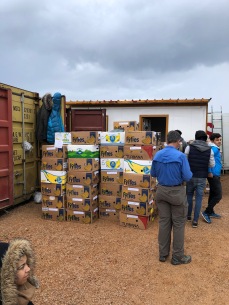 Pallets of aid soon became piles in the once empty container.  It only took about 30 minutes and just as the last boxes were put into the container the skies broke and it started to pour.

Everyone rushed to their vans/cars and headed back to the never ending work.  We loaded our van and Iris Center’s vans with hygiene aid (shampoo, deodorant, washing powder, toothpaste, diaper).  Since the center has closed the aid has had to come to the camp.  Not convenient or the best delivery method.

Tickets were handed out by the interpreters by area and soon a line formed.  The rain, while looking threatening, never materialized the 3 hours distribution took place.  Kids

and mother’s we had given aid to were back in line for the third day.  The ground was muddy, it was cold.

It was bittersweet knowing this was our last day working on the island.  New friendships have formed and I was lucky enough to see friends from my last trip.

Dinner was at a family run restaurant in a beach town not far from Chios.  We were a table of 13, volunteers, interpreters, friends.  The founder of Iris House told us the the story of how she came to the island 3 years ago for 10 days………MAYBE 2 weeks.  And is still here providing essential items that without her distribution would not happen.

We will be sad to fly to Athens in the morning, and hope that if we do return our friends are not here in Chios.  But are instead resettled into their new countries.